For several years now we’ve been covering the Lovecraftian rock opera ”Dreams in the Witch House”. We’ve accepted that madness indeed is our destiny after hearing the haunting eldritch music, and even met Keziah Mason herself. And just a couple of days ago we broke the news that there’s now even a music video to accompany the purple double vinyl! The great music aside, the video delivered quite a visual wallop with its beautiful mixture of old and new. And we have all that to thank one man for, H.P Lovecraft Historical Societys very own  Andrew Leman. One of our editors had the privilege to sit down with Mr. Leman for an extensive chat on the subject of music, film and building gigantic, yet small houses. 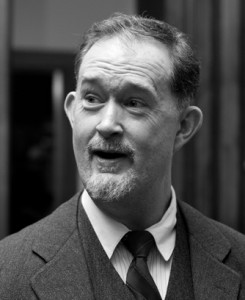 We have seen the Historical Society make some impressive feature length movies in the past, but never a music video like this.  What prompted you to make the video in the first place?

Andrew Leman: Mike Dalager and his team produced an amazing rock opera, and in this day and age you’ve just got to have a video to go with that kind of music. We were eager to be the ones to make it, and we wouldn’t have trusted it to anyone else. Also, Mike can be very persuasive, and his enthusiasm is hard to resist.

What challenges did the project present?  Your usual hallmark touch has a strong presence in the video, but there’s also a fair share of more modern touches, making it feel more like a fusion between silent era film and modern music video.  Was it difficult to combine these two elements, or did it in fact present possibilities that you hadn’t thought of before?

Andrew: It certainly did require us to stretch outside of the kinds of film projects we’ve done before, adding color and synced sound and sex appeal and other elements that our previous feature films have lacked. Our older film projects, ”The Testimony of Randolph Carter” and ”A Shoggoth on the Roof,” both were in color and had dialogue, however, so we were not completely new to those storytelling techniques. And our brilliant cinematographer/editor, David Robertson, has made a number of professional music videos before and very much knew what he was doing. I think he was delighted to bring color and rock and roll style to a Mythoscope™ project. And it absolutely stirred ideas for a fusion that would not otherwise have occurred to us. I think the very final shot of the video, which is a modified version of our studio logo, is a great expression of that. 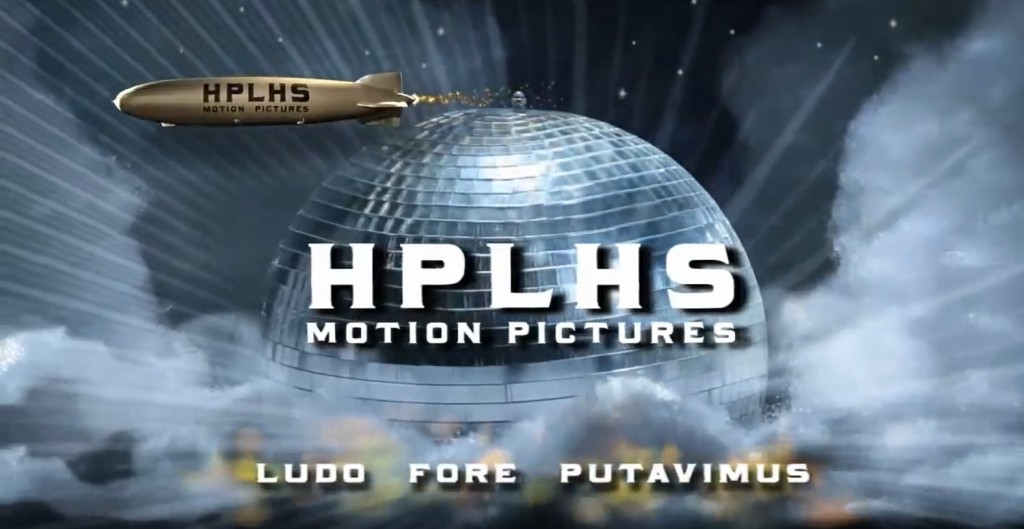 Did you experience any problems adapting the narrative style of the story to the new format?  Since a music video is so driven by melodies and beats, it must’ve been quite a different experience from making more ”standard” films in terms of storytelling.

Andrew: The song is not a very long one, so one challenge is simply trying to cover the story in a very limited amount of time. We had to be selective about what parts of the original tale to include, and had to omit parts that we might have found room for in a longer piece. Brown Jenkin, for example, does not appear on screen in this video. Modern audiences, however, have learned how to digest visual information extremely quickly, so it’s entirely possible to convey a lot of story through very brief images. In many ways it’s a strength to tell the story in a highly compressed, iconic form. Lovecraft always believed in leaving lots of things to the imaginations of his readers, so a short video that evokes emotions and then moves on is a perfectly Lovecraftian thing to do. 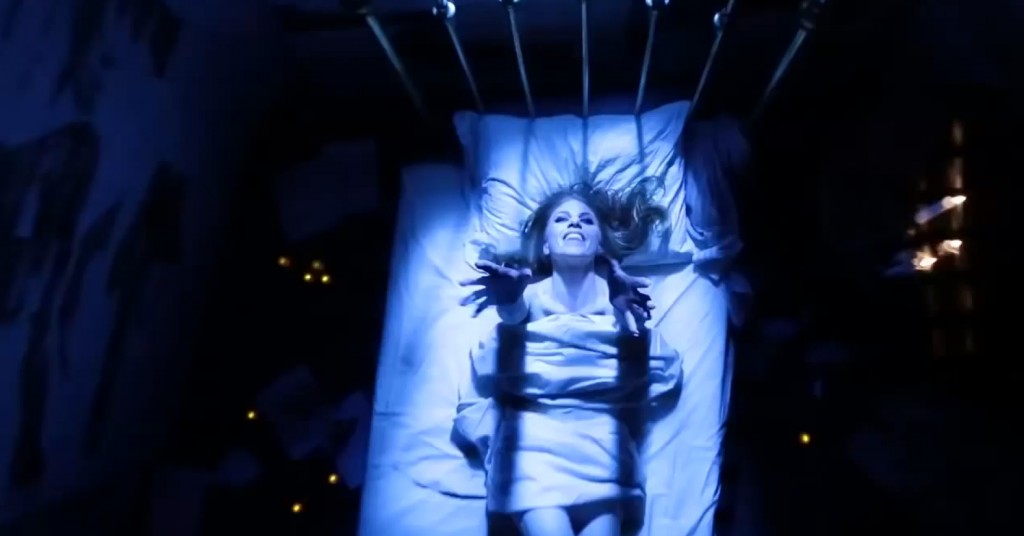 Was this fusion always the idea, or did you ever have any alternate versions of the video in mind?

Andrew: We always knew the video would be a blend of our trademark Mythoscope™ style and a modern color rock video look. I don’t think anyone knew until it started to come together in editing exactly how the blend would be achieved, and how the parts would balance. I don’t think an all-Mythoscope™ version would work as well, nor would an all-rock version. 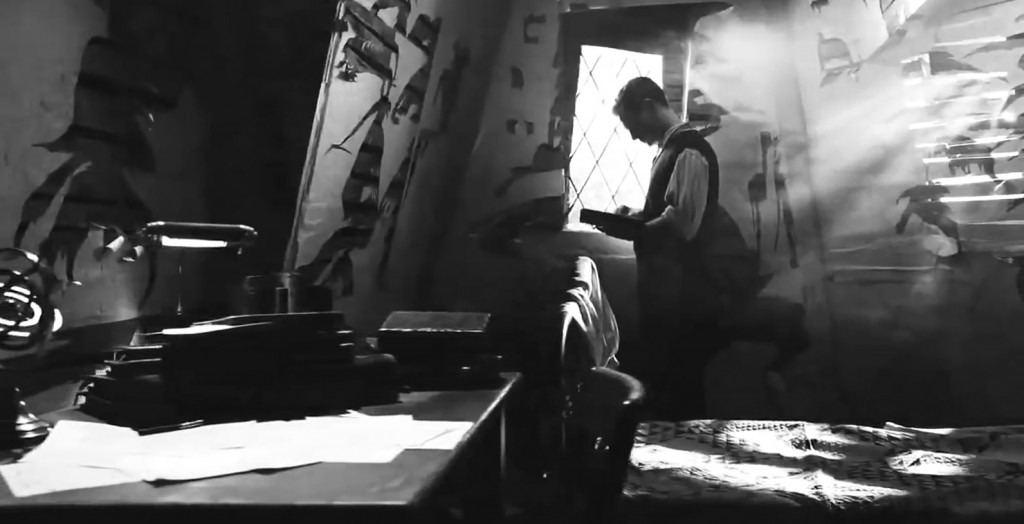 Let’s talk about the visual style a bit more.  What were your influences for the black and white parts?  There’s a strong hint of German expressionism in the set design – was this intentional?

Andrew: It was entirely intentional. Two films from the 1920s that were direct inspirations for the video are ”The Cabinet of Dr. Caligari” and ”Häxan.” Gilman’s bedroom was highly influenced by the sets in Caligari. 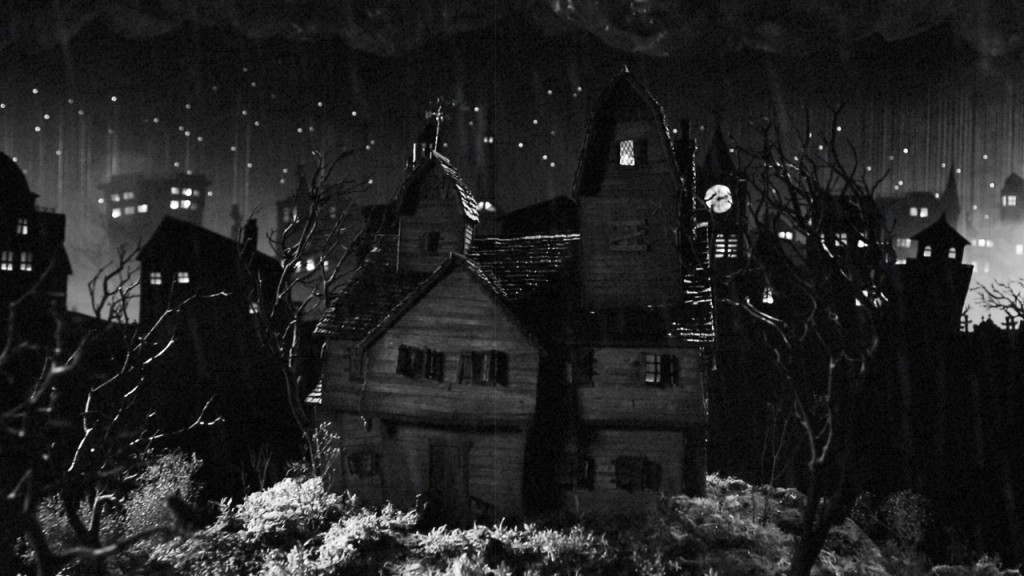 There’s an impressive model used for the exterior shots of the house, with a skyline in the background.  Just how big was this model, who made it, and how did you decide to use models in the first place?

Andrew:  We knew from the very beginning that we would want an establishing shot of the Witch House itself, and we also knew it would be a model so that we could control the lighting and shoot it from various angles and get the sense of period and heightened reality that we wanted for the video. Knowing that the set of Gilman’s room would be expressionistic and distorted, we wanted the house itself to have some of those same qualities. Also, it’s just fun to build and shoot models. 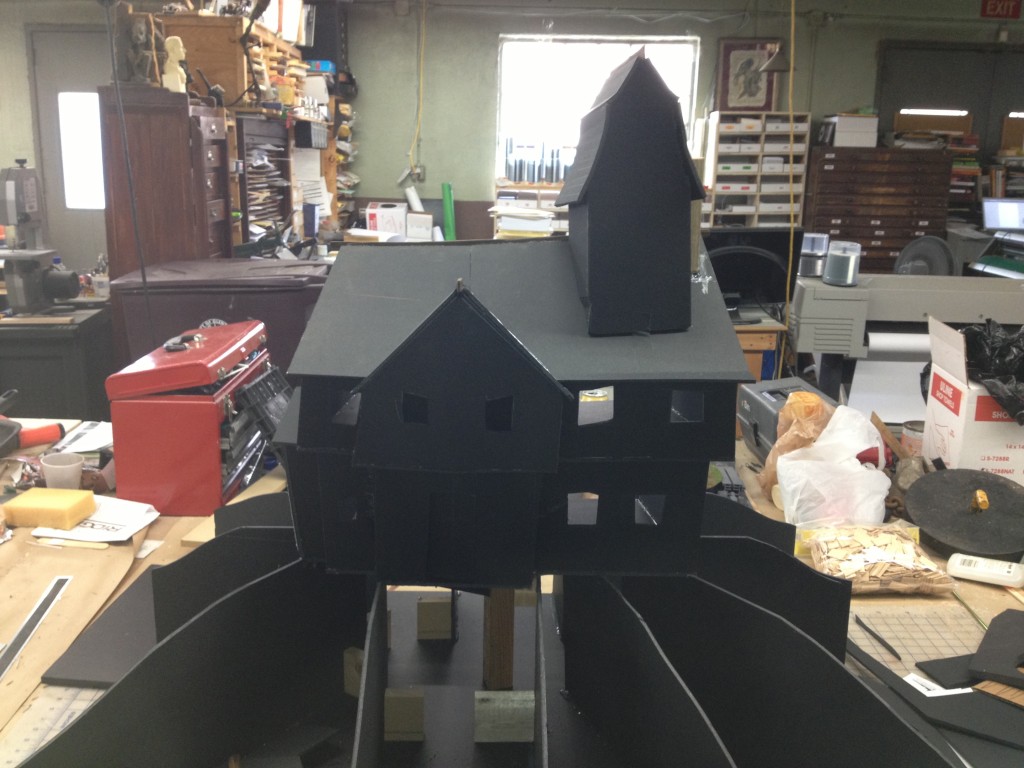 The design was inspired by real houses from New England, along with artistic visions of ”haunted” houses or fantasy witch houses. We started building the miniature last in June of 2013. It was built by myself and Fred Manchento, with scenic help from Jason Voss. The structure is made of foam core board, a lightweight but rigid material commonly used in architectural models. The siding is made of paper with woodgrain printed on it. The roof is covered by real wooden shingles all applied by hand. 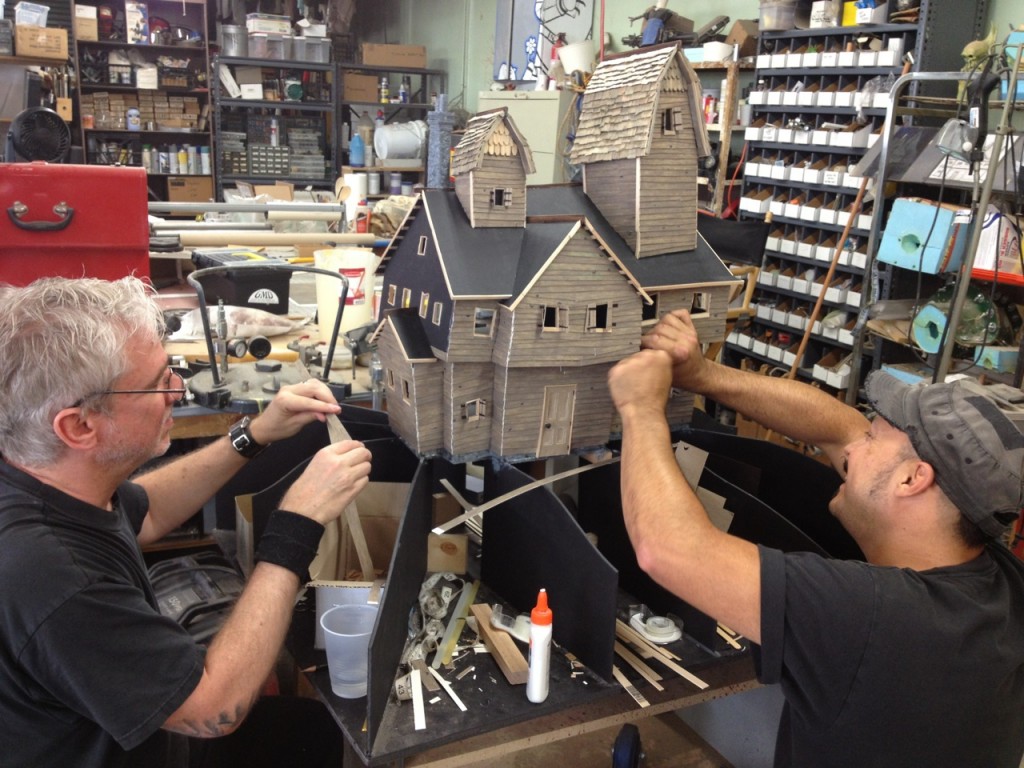 The finished house is about two feet wide and a little over two feet high, standing on a base that’s about six feet wide and six feet deep. Fred Manchento did the vast majority of the miniature landscaping around the house, and even built a miniature raven to perch in one of the trees. He also hand-made the miniature weather vane on the top. 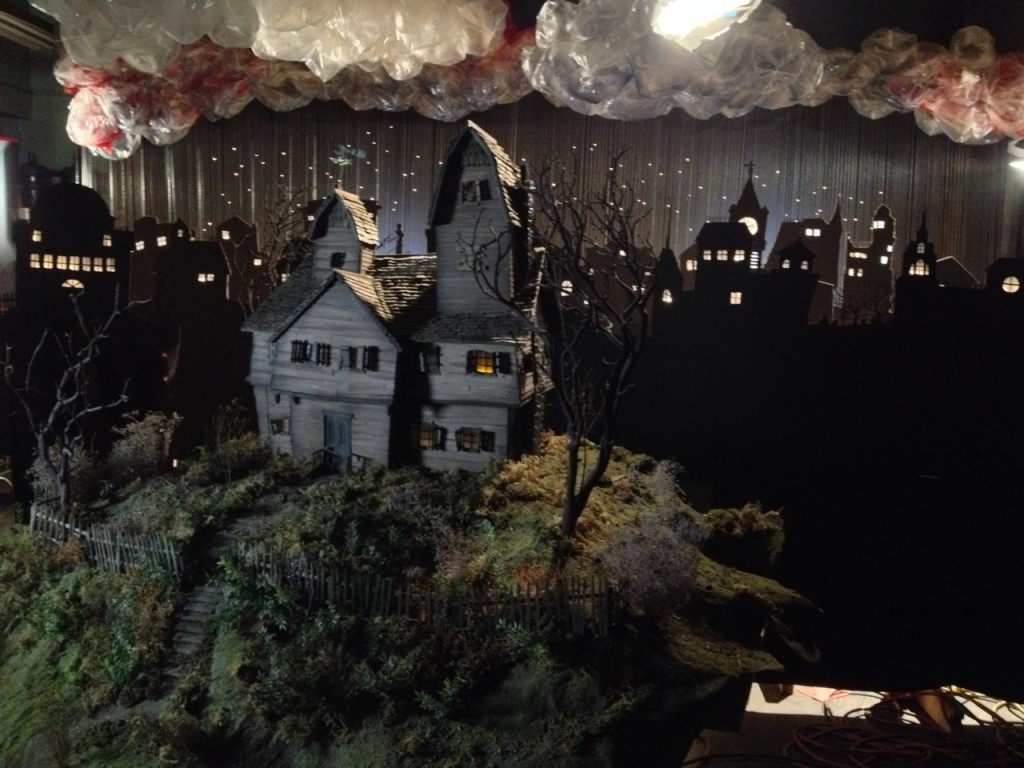 The miniature house is sitting in front of a silhouette backdrop of Arkham. I built that myself, and it’s made in several sections that are layered and span across about 16 feet. Behind the silhouette city is a ”rain curtain” made by myself and Fred Manchento, which is 16 feet wide and 8 feet high, and behind that is a black night sky backdrop with Christmas tree lights in it for stars. Fred made miniature clouds to hang over the scene out of plastic trash bags. The whole miniature set occupied about 256 square feet of our studio space. 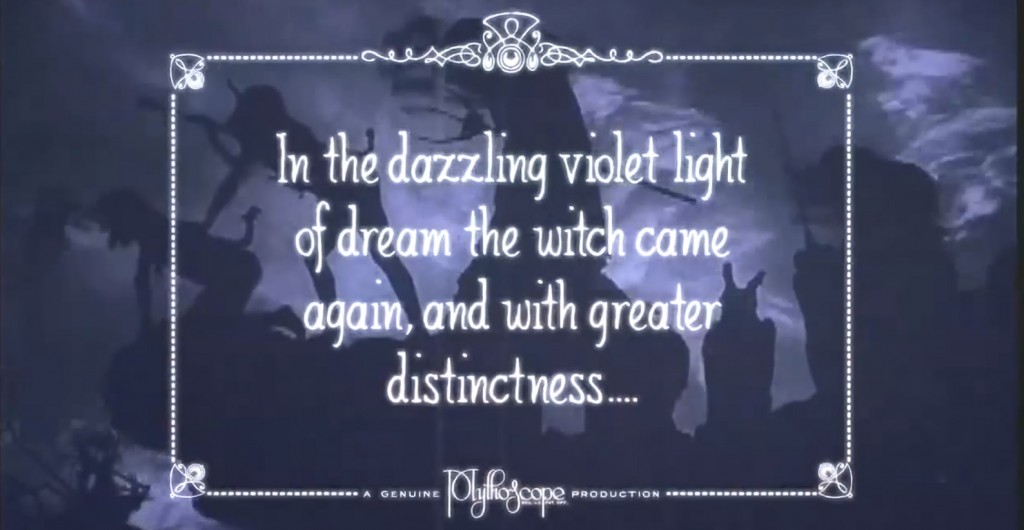 At the part of the video where the purple eldritch light comes into play, there’s a scene with what seems to be goblins or demons.  This is strongly reminiscent of films like ”Häxan”, the classic Scandinavian production that’s somewhat based on the Malleus Maleficarum.  Please tell our readers a bit more about your inspiration here, and perhaps a bit more on how these scenes were made?

Andrew: You have a good eye. We used some actual clips from ”Häxan” itself, and we also recreated one of the scenes from that classic film so that we could include our Witch and The Black Man. The scenes that play over the intertitle cards, where the witches are flying past the camera and the demons are waving to them, are actually scenes from ”Häxan” itself. Because that film is Scandinavian and from the early 1920s, it seemed an absolutely perfect fit for the video. There’s a scene in that movie where a witch sacrifices an infant, and since there’s a similar scene in the story, we thought it would be great to recreate that scene but use the characters from Lovecraft’s tale, played by the actors in our cast. Our very brilliant special effects makeup artist, Dave Snyder, built a new and improved prop infant with silicone rubber legs that could wiggle a little more realistically than the rigid prop infant used in the original scene. Mike Dalager stepped up to play The Black Man, and Alaine Kashian and Jacob Lyle did a great job as the Witch and Gilman. We filmed it here in our studio with some layers of tree branches Sean found in his own backyard, and David Robertson lit it so that the rest of the background just falls away. 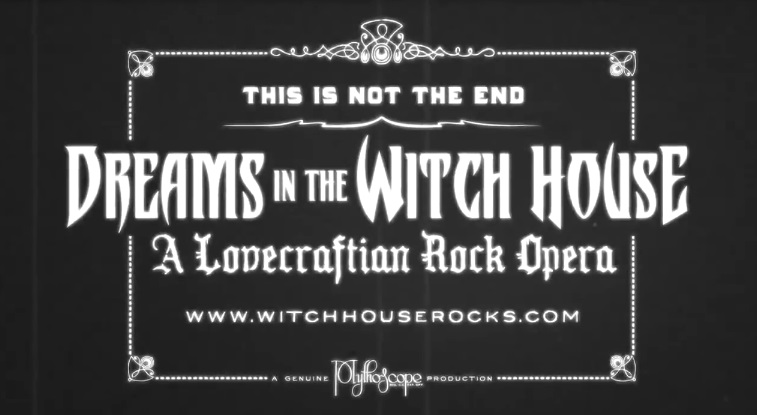 One of the last title cards reads ”This is not the end”.  We’ll understand if you don’t want to tell us too much about what this means, but are there in fact plans for more music videos?  Could there even be plans for a metal musical of sorts, combining several music videos into one larger tale?  Or is this hinting at something completely different?

Andrew:What I can tell you is that we know that this video will not be the final chapter in the life of ”Dreams in the Witch House: A Lovecraftian Rock Opera.” It may go on to concert performances, a fully-realized stage show, more videos, or any number of other things. Mike and his team are highly talented, and Mike is an ambitious and visionary producer.

Cryptic, albeit promising words from Mr. Leman! It may be true that future is still cloaked in shadows, even for us at Frombeyond.se, but I have a pretty good guess that this won’t be the last we hear from Andrew or Mike and his crew.  Whether it be thundering rock operas or black and white beasts on the silver screen, the Lovecraftian horrors marches on!